6 Comments
Jana, The Past

Black Thursday, or, How I Learned That Vodka and Beer are Different Kinds of Things

Jana: As school is now out for the summer, I will tell you a summer tale.

It was 2002, the summer before my junior year of high school, and rebellion was in the air. In my early high school years, I was adamantly opposed to drinking. My opposition stemmed from my fear of change, as well as believing myself to be way above that stuff, not needing it to have fun, never wanting to grow up, etc. In my mind, the future consisted almost entirely of me reading on the green of the really good college I was going to get into, and I’d never had any desire to get drunk, even when my friends had casually brought it up as something they maybe wanted to try. “Seriously, I just don’t have any interest!” I’d been known to say when asked.

But on the 4th of July, 2002, the stars aligned. I was on an elimination diet started by my homeopathic doctor in order to figure out what I was allergic to, so I hadn’t had gluten in weeks and I weighed about one pound. My hair had been french braided, which somehow filled me with great confidence despite the extra frizz it created around the edges of my face. And we were at a pool party. People started drinking and I thought, naw. But then, my CRUSH started drinking. He’d always agreed with me about the not needing alcohol to have fun thing, but on this night, as we all sat around the host’s bedroom, he asked for a drink! I didn’t hesitate; I grabbed a beer.

All I know is that I had that one beer and the room got twirly and it was AWESOME. And I was like ok, this is fun, I’ve maybe never had so much fun. EVERYONE had SO MUCH FUN. The night ended, but the summer was just starting, and we all agreed that we wanted to do that again As Soon As Possible. We settled on the following Thursday. My crush himself offered to have everyone come drink in his basement – his parents would never come downstairs!, he assured us. We all agreed that it was a foolproof plan.

Someone got us alcohol, I’m not sure who (later we had regular suppliers, but at this point it must have been a lucky break). But various things were purchased, and we all headed over. It’s important to note that I was wearing cloth track pants on this night, and I was wearing them because I had so severely sunburned my ass the week before, while reading “The Joy Luck Club” at Walden Pond, that I was unable to pull jeans over it. Neither here nor there. We arrived, wearing cute summer clothes (everyone else) and cloth track pants (me), and started to drink. Now, listen to this:

WE DID NOT KNOW ABOUT ALCOHOL. No one had ever told us, in all of our 16 years, that there is a difference in alcohol content between beer and vodka. It just didn’t occur to us! So, while I was randomly lucky in my selection of beer, the majority of my friends were not so lucky. They held gatorade bottles full of vodka. JUST vodka. And they were drinking them. Rapidly.

About 2 beers into my night, and at least half of the gatorade bottles in for everyone else, the inevitable happened: the kid’s mom came downstairs. OBVIOUSLY. Here is what happened next: one of my friends threw up gum onto the pool table. Everyone else, also, needed to puke around this time. We poured out of the little basement door, most of us puking on the lawn and street. I’d only had two beers, or the equivalent of six beers, so I was the most sober, and I tried to collect people into a group. Where would we go? But then, a miracle! A guy who’d graduated two years ago was driving by, right at that moment. He stopped and piled us all into his car! I felt safe and happy, especially because there was another guy with him who I didn’t know and who I thought was PRETTY cute.

The older guys drove us to the playground of one of the local elementary schools. Before we arrived, my friends puked all over the backseat of the car, but the guys were really nice about it. When we got to the playground, we fell and pushed our way out of the car, and by now mostly everyone was crying. Deep-seated angers, dormant before the alcohol, came out big time. People were yelling, and accusing other people of things. I was sort of making a show of helping out (ie, “are you ok? you guys, come back here! you can’t just wander into the playground, I love you!”), but mostly I was flirting with the cute guy, who turned out to be a little bit foreign. He lent me his sweatshirt (to wear with my cloth sweatpants), so I was pretty happy.

In the end, knowing that there was nowhere else to turn, I called my parents. Being kind-hearted, they picked us all up, nursed us, and literally helped to pick puke out of people’s hair. The night was LONG. People slept all over the floors of my parent’s house in various stages of emotional and physical disarray. The next day, everyone was  still sick. Sitting on a bench on Mass Ave, I remember just wondering if we were all going to die. 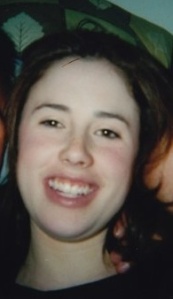 Here I am later in my drinking life, in a self-taken, disposable camera shot. Beautiful, you say? Oh you stop it.

That summer included other adventures, like a night in which we all told our parents we were having sleepovers and then slept in a field (we thought this would be the best time EVER; in reality it rained and everyone fought and it was like, why did we think that would be fun? Plus my parents found out and grounded me). But in August, as we reflected on our summer of rebellion, the drinking day, a Thursday, was the most memorable. We decided to call the day “Black Thursday”, and the following year it was memorialized in everyone’s yearbook blurb (ie, “Love my GIRLS! BlackThursday, Other memories, etc.”). Black Thursday went down in high school history.

PS. The foreign, sweatshirt guy did call me and ask me on a date to the beach the next weekend. This filled me with such CRIPPLING anxiety that I spent the morning of our scheduled date pacing my house, circling the sandbox in our backyard, unable to eat. When he stood me up (he never even called), I was so, so relieved and happy. I remain relieved to this day. I’m certain that, at that stage in my life, a beach date with a cute foreigner would have actually killed me.

Catherine: What. A. Mess. I only WISH I couldn’t relate to this.

We all have them.