To The Woman Currently Cutting My Hair: Are You Paying Attention?

Jana: Recently, I got a haircut. If it’s alright with you, I’d like to tell you about the full experience of my haircut.
At 6 AM on the day of the haircut, I got up and drove my boyfriend to the airport, as he was leaving to move to Los Angeles. Then I came home and lay in bed being sad for a while. At 11:30 AM, I roused myself, ate three pieces of toast, and got in the car to meet my sister, because we had purchased “Living Social” deals to get haircuts for only $20, and we had thought it might be a nice activity for the day that would help me take my mind off my boyfriend moving and my having no money and no real plan for my life. I was encouraged by the thought of the haircut.

I need to note that my encouragement was a product of that pesky human inability to accurately remember pain (my best example of this is eating hummus only ten minutes after having been on the toilet bargaining with God because of hummus-induced problems. Once it’s over, I’m always like, it wasn’t so baaad. Ooo is that Sabra? What kind of crackers do you have?). Because, when I’m being honest with myself, I’m fully aware that I always have a terrible time at a haircut. The conversation between me and the hairdresser is a lot like this, always:

Hairdresser: You really need to stop straightening your hair. This is really damaged! If you don’t drastically change your lifestyle, it’s going to be damaged forever.

Hairdresser: And oh my god, such little hair! It’s so so thin!

Hairdresser: Ok, I’ll see what I can do but I can’t make any promises! *Laughs*. So, are you excited to start high school in the fall?

Then they cut off the split ends and try to make conversation which I try to deflect with silence; then, I pay them $60 and go home to furiously straighten the hair.

But, on the day of this haircut, those memories were all rose-colored. Off we went to our haircut with tear-stained faces (just mine, my sister was fine) and hopeful hearts.

It was a very hot day, so we were excited to get inside to an air conditioned room. We ran across Mass Ave and into the salon and found it… stale. Terribly, terribly hot, and empty save for one girl getting her hair cut by a strange-looking man who was wearing a T-shirt that said “I’m just here to annoy you.” We approached the front counter, where a woman stood looking over some papers. She completely ignored us. “Hello?” we tried. She was obviously pissed that we were there. “Busy now, you can sit over there,” she said (it became clear at this moment that she was some kind of European foreign, which I’m only saying to accurately set the scene). We didn’t know what else to do, so we went and sat over on the weird-looking bench. From that vantage point, I could now see the woman’s full person:

This was an older lady, maybe in her late 60s, with cropped white hair, which is fine and good. She was wearing a somewhat ill-fitting dress that really highlighted her stomach paunch, which is also nothing I’m ever gonna get on a high horse about (am I right ladies? – sorry, I don’t even know what that joke was). But ok, HERE IS THE KICKER: on her feet, she was wearing those shoes that have the individual toes. I don’t even know that you can really call them shoes, but regardless, I’ve always understood them to be designed exclusively for endurance running. And yet, this woman wore them in her hair salon, paired with a dress. Furthermore, the shoes appeared to be wet.

You heard me. They were wet. As if she’d recently been walking in some sort of river.

Despite the shoes, we stayed. My sister was soon taken in for haircutting by the “Annoy you” t-shirt guy, who’d finished with the other girl. As I flipped through a magazine, I sensed from overhearing my sister’s conversation that the male hairdresser was in fact quite capable and normal; they laughed together as he cut her hair. I relaxed into the uncomfortable wooden-wicker bench.

Eventually, old Wet Shoes was ready for me, which she signaled by pointing – “Sinks, I meet you over there.” I went to the sinks.

Once we were there, in the familiar space of an awkward salon hairwashing, I sort of started to like her. She told me that she had just seen that movie “Hot Mike,” and that it was full of “beautiful bodies.” She explained that she’d been so rude earlier because she’d been trying to find an envelope full of something to do with taxes, and it had ended up being right in front of her. I got that, I’ve been there. I figured it would be ok.

And it was, such as it was, in that she did cut my hair and we did interact with only mild awkwardness. However, as we chatted, I couldn’t help but notice that she seemed to be really arbitrarily selecting pieces of my hair to cut. Juuust whatever. Just a piece here, a piece there. I didn’t see a PATTERN, see. In addition, TWICE during the haircut, someone came into the salon to ask her something, and she talked to these people WHILE SHE CUT MY HAIR, with her head fully turned away from what she was doing. So, I worried. But I was so TIRED and emotionally drained, and so sure of my inability to speak up for myself, that I just settled into it. I equate this situation to quietly agreeing to rent a HIDEOUS house that I’d have to live in for six months for fear of insulting the realtor. We live in our hair, is what I’m saying.

Then it was over. We tipped, we left. When I got home, it became very clear that my wet-shoed friend had cut a full layer of bangs all the way around my head. Like, an all-one-length layer. Left alone, this very closely resembles a mullet, or a poorly done version of the haircut Rachel had on “Friends.” But it’s ok! It’s just the way it is. I have a bang, around my head. And because hair grows at the same rate over time, I can only assume that this is how it will always be. 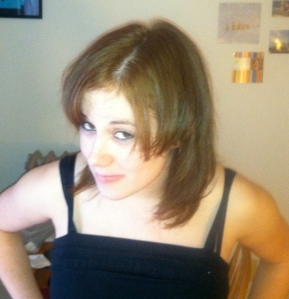 PS. Right after the haircut I cried while eating half a pizza and then fell asleep watching “Something Borrowed.” Just to be clear about the day.

Catherine: If there’s one thing I like to make fun of besides Jana’s allergies, it’s her hair. It defies gravity. It has been known to fight the strongest straighteners, the firmest tugs of the comb, and emerge victorious, standing straight up on Jana’s head like a crown.

Jana, you gotta stop cutting your hair. You do it all the time, it never looks different, and you’re always really sad afterwards. This story, I hope, will teach you to steer clear for at LEAST a year. You don’t deserve the pain. You simply don’t.

And also, you should have been tipped off by the toe shoes. Those are disgusting. The only thing I hate more are probably Tevas, shoes that look like Tevas, and birkenstocks with socks. It’s in the top five worst shoe – I would’ve walked out then and there.

LAST BUT NOT LEAST – Jana and I will be reunited again next week! Maybe something horrible will happen? It probably will. We’ll let you know.