A Friendship Without Benefit

Jana: As a kid, I did have some good friends – other kids who’d known me forever and didn’t even notice my dirty tapered jeans. But as a kid in new social situations, like musical theater-based summer camps, I didn’t make friends so easily. I WANTED to, of course, but I was terrified. What I’d usually do is find a girl I knew I wanted to be friends with, develop a crush-like obsession with her, and then be unable to speak in her presence. Sometimes, by the second-to-last day of camp, I’d have forged a mini friendship with her, which was incredibly elating! But then camp was over, and with it, the future I’d imagined for us.

There was one such situation, though, that stood out from the others because it LASTED past the usually depressing final day of camp. This was a friendship that, against all odds, went on for at least a couple of post-camp months. It was like this: I met Arianna at musical theater camp (ok fine, it was OPERA camp. I’ll get into it later). We discovered that we had the same birthday, which I was glad that she also recognized as being AMAZING and OH MY GOD! and a sign that we were destined for friendship. We started to hang out at camp, and then the day of the performance I remember being really nervous and excited because she had her mom talk to my mom and set up a play date! This was really going somewhere. 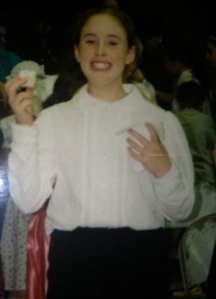 This is what I looked like on the day of the performance. Which offers no answers as to why I had any friends, anywhere.

But then, we actually had to HAVE the play dates. My memory of these “dates” is that they were just really frightening. I lost all sense of what I might say when I was with her. When I did start to talk, I was so nervous that my throat would close up and I’d start coughing instead. I remember being in her room, awkwardly standing while she sat at her desk, deafening silence surrounding us as I racked my brain for something to say. I never thought of anything.

This friendship was also where I developed my deep fear of repeating a story I’d already told. One time, we were walking through the town center and passed a toy store. I had a thing to say! I told her, haltingly, that I really wanted a personal mini bubble gum machine (WHY did I want this? I DO NOT KNOW). But about halfway through this “story”, I realized that I had ALREADY told her about it! It was one of the things I’d coughed out in her room earlier! It was terrible. She smiled, but I knew I’d made a big mistake.

STILL, she wanted to keep hanging out. Again, WHY she wanted this, when I clearly could offer NOTHING of any value and was obsessed with useless objects, was always a mystery to me. But I kept dreading it and then going to hang out with her. I even went to her birthday party, where all of her friends danced to the Spice Girls and I stood in the corner, not dancing or talking to anyone, wearing a sweatshirt which was decorated with the words “I’m Not Listening” and a picture of a guy sticking his fingers in his ears (one of my staple outfits).

Eventually, the friendship must have faded, which was a huge relief. Recently, my mom and I re-hashed it over dinner. “I remember, I know, that was so weird,” she said. “Dad and I also couldn’t figure out why she kept wanting to hang out with you! But then when you were in high school – oh my god, yes! Now I remember. I read something about her in the paper – that she was advocating for the gay-straight alliance or something as an out lesbian at her school. It made so much sense to me when I read that – THAT was it, that’s definitely why she kept wanting you around. She thought you were gay too, because you looked like such a little lesbian!”

Catherine: I want us to come out with a book only so I can use the title I didn’t realize would be a best-seller till just now – Jana: The Little Lesbian. Bestseller. Stores won’t be able to keep it in stock. Little lesbians everywhere will be crushed when in chapter 13 you finally reveal you like boys, even though it is a complete mystery why they like you. I will play the winning sidekick, coaxing you away from that (actually really awesome) sweatshirt, taming those weird hairs of yours that always stick up. In the climatic final scene (set at the prom), a teacher will ask you to leave, assuming you are from the middle school. I will stick up for you and it will go alright at best, while someone  probably laughs at us and calls us fat before throwing a cake onto our pastel satin gowns. I don’t know. I’m still working out the ending.