What I Did For Love (of weird theater, and in the pursuit of completely unattainable dreams)

Jana: Aright guys, huddle up. I’ve been watching a lot of “Friday Night Lights” lately, but what I really want to talk about today is the series of weird plays that I was in during my college years. Please enjoy.

The Gas Heart is a “Dada” play. “Dada-ism”, which I don’t really actually know anything about, is a form of art in which nothing means anything. The play “The Gas Heart” is just six characters (character names: Mouth, Ear, Eye, Nose, Neck, and Eyebrow) talking complete nonsense. Really. They talk, but they don’t actually SAY anything, at all. This is huge amounts of fun for the audience! I played Eyebrow, and the director conceived of my character as a mental patient, in a straight jacket. My lines were uttered while pacing and shaking back and forth.

It was the first part I got in college, and my proud parents drove to Vermont all the way from Boston to see the show. They weren’t, in the end, that glad that they had come. Luckily, they’d had lots of experience sitting through really terrible productions I’d been a part of, so it wasn’t a NEW bad experience, just ANOTHER one.

The Measures Taken was the one act play I was cast in the following year. This, too, was mostly people saying things that didn’t mean anything. Except that this one had an underlying theme, which I believe had to do with the right of the common worker. I THINK this was the point of one montage in which one of the (white) cast members wore a coolie hat and acted out a conflict in a factory of some sort; however, I can’t be sure.

Mostly what I understood about the play was that I was dressed in all black, usually crawling around the stage, and always speaking in unison. There were four “leaders” who also carried long sticks, which must have symbolized their power.

Wisely, that year my father stayed home. My mother, though, trekked three and a half hours to sit there and again be perplexed and, undoubtedly, pissed off.

THE BOOB PLAYS AHH NOW WE’RE REALLY GETTING INTO IT

Ok Guys. So, yes: in college I was in not one, but TWO, plays in which I was topless or half-topless for a number of minutes at a time. This is a weird thing about me. It’s a thing that I now look back on and think: What? That was weird Jana. That was really weird. But it happened, and one day I’ll tell my grandchildren about it and they will either think I’m badass or be totally grossed out (definitely the latter, of course).

It all started with a play called “La Ronde”. “La Ronde” is entirely about sex, and when it was first produced in Germany way back in a different time it was incredibly scandalous. It starts with one couple who has sex, and then the next scene is the dude from that couple and a new lady, and the scene after that is that same lady and a new dude, all the way until we’re back with the first lady again. The circle. You understand.

I was cast as lady #1: luckily, Lady #1 did not have a name other than “Prostitute”. Now, you should know that this was the first big lead I’d had in college, and actually the first lead I’d had since my shining moment as “Peter” in “Peter Pan” way back in the 8th grade. So, naturally, I was excited and proud! I saw the cast list, FREAKED OUT, and called my mom right away. Prostitute! I’ll be playing the Prostitute! What? Oh yeah, she does have to get naked, is dad home so I can share the news?

So, there it was. In the final scene, for no actual reason that I am now, in hindsight, able to discern, my character let go of the blanket she was clutching, spent one to two minutes topless in front of full audiences, and then found her nightgown hanging on the bedpost and pulled it over her head. On opening night I was very nervous, and when at last the moment came to dress myself the nightgown seemed to be just a pile of fabric, and it took me what seemed like YEARS to find the opening that I could pull over my poor, naked head. As a result, I ended up topless for three to four minutes while I searched for it. This was really uncomfortable for, I’m sure, everyone.

The rest of the run went smoothly. My parents came, many other people came, we got decent reviews, and most people I went to college with have seen my boobs.

Here I am backstage, in my Prostitute costume. That red thing around my neck is a “Ho band”, which ladies of the night used to wear so that dudes knew what kind of ladies they were.

But Jana, you may be thinking, didn’t you say you were in TWO plays in which you showed your boobs to strangers? Well, reader, I did. The kicker here is that in the second play I only showed ONE boob. Which at that point, I was like, one? Oh sure. Right or left? Whichever. Who wants to get lunch after this?

But seriously, I was cast as the first female actress on the English stage in the 1600s, and in one scene she gets her portrait painted, and the painter says that nobody’ll believe she’s really a lady unless she shows a tit (actual dialogue). So then she opens up the corset that the costume department designed specifically for this moment, and literally takes out one tit so that she can be forever remembered that way. And of course, when I’ve been saying “she”, I’ve been meaning me, me right here, this is what I did.

My parents are great people. They did not make too many jokes when I again called with the news that: I got the lead! What? Yeah she does but just one this time!. They came and supported me. There was talk, of course, amongst the theater department, that I was being typecast as the girl willing to show one or both of her boobs onstage. We laughed! Just college, kids doin whatever they have to do for their art because later they will definitely work in that field. You know how it goes.

Here I am in my specially designed for one-boob-display costume. Although I would never have admitted it, I think the photographer captured the strain I must have been feeling from all of this toplessness.

So there you have it. And when I say “There you have it,” I don’t mean that I have now given you the complete story of the weird plays that I have been in – oh no. I simply mean, that’s all that I will tell you for today, because I have to go watch another episode of Friday Night Lights.

Catherine: First off, I want to commend the Jana for watching FNL – it is the best show ever, and the fact that Tim Riggins isn’t “real” or “into me” will always depress me.

Oh, RTT… the memories. The happiness, the massive destruction, the forgetting lines on stage. Memories, people. Here I am, looking wonderful backstage, in Jana’s first boobydebut. I would like to add that Jana and I tried, really tried to lose weight for this damn show so we wouldn’t frighten people with our bodies. It didn’t work, but even if it had, with faces like this (see below) I don’t think it would have mattered much/at all.

Additionally, I would like to add that I assistant directed on Jana’s second booby show, and that that moment of the show was just SO FUNNY and if I could speak with the playwright I would be all like, … why did you put that moment in there? It is so weird. And so is like, a lot of what is happening (ie – one character descends from the SKY in a chariot, completely naked, covered by a shield thing?) 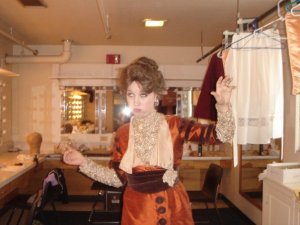 This, from a backstage series of photos. Clearly, I was unstable.