2 Comments
Jana, The Past

Jana: Once I got to high school, things were different. As you can probably guess, this was almost exclusively to do with my hair. You see, one day at the end of my annual haircut (during which I fielded the friendly chatter of the stylist I’d known for years with one-word answers choked out ridiculously fast and with the sore throat that I got whenever I talked to people not in my immediate family), I managed to give her approval to straighten my hair after blow drying it. As always, I sat in silence while she worked and tried to talk to me, and then slowly lifted my head to look in the mirror when she said she was done.

I remember being honestly shocked out of my fucking mind, because I looked DECENT! It was amazing. Afterwards, I have this picture of going to CVS to pick up something random, and my mind’s eye just wanders over the check-out counter while I think to myself: I’m beautiful. This is it. It’s happened. Maybe there’s a way out of my weird frizzy world! WHAT IS HAPPENING? Yes I will pay for this chapstick. LOOK AT MY HAIR!

Anyway, obviously this only lasted until I washed my hair (luckily THAT didn’t happen very often, so I probably got a good week off that first buzz). But eventually, the straight hair was gone with the water and the Pantene two-in-one shampoo plus conditioner that I thought was so effective. But I’d had a taste of freedom from hair hell, and I knew I had to have it again.

When I graduated from the alternative school where I spent my childhood, I had no choice but to enter the public high school in the town where I actually lived. This didn’t happen without a LOT of crying, self-questioning about why I had to become an adult, etc, but as these things go, September did come and I did have to start high school. Prior to doing so, though, I was able to convince my mother that my life would not continue unless I could get my hair permanently straightened. Not being cruel or blind, she gave in, and that is how I came to start high school looking somewhat like a normal adolescent.

And then the craziest part. The boys at the new school didn’t know about my past. They hadn’t seen this picture: 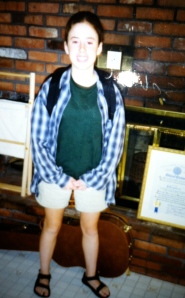 Here I am on the first day of 8th grade. Really take it in, and then think about how much had to change before boys started to like me.

They thought I was the cute new girl. I was completely shocked. It seemed like a lie. It was way too much to handle! I didn’t even know. I did not. Know. What to do.

He was the nicest boy in the world, or at least, definitely in the freshman class. For the purposes of this entry, I will call him Mark. Everyone loved Mark, because there was not one thing not to love. He was kind and smart and talented. And for some reason, he liked me. I knew this because he told someone who told me, and then I got wind that he was going to ask me to the semi-formal dance. I died. He asked me, I did not pluck my eyebrows or put on makeup, we went to the dance, I hardly talked to him. Afterwards, for some reason, he chose to ask me to be his girlfriend, which I somehow managed to say yes to. Throughout this entire time, I barely looked at him.

The point that I want to get to is that I was in the chorus and Mark was in the band and eventually we were both on a trip to Quebec. I knew this would pose considerable awkward hurdles, and I dealt with them by not thinking about them, from what I can remember, and instead loading up on disposable cameras. But on the last night of the trip, there was a cruise. Sunset, boat, romantic, etc. Everyone told me that he was going to kiss me that night. This is where my head immediately went when I heard this: NOT AN OPTION. I don’t think I even remotely considered the possibility that we might actually kiss and I’d survive it. I just went straight into survival mode, which is to say that I COMPLETELY avoided him. I spent the whole night hiding behind people. I went to the bathroom for huge stretches of time. I hid in corners.

Somehow, the cruise ended without us ever being alone. WIN! We got back on the buses, where we had to sit with the seatmates we’d picked at the beginning of the trip (I’d forced a friend of mine to tell Mark that she REALLY WANTED to sit with me, so it looked like it wasn’t my fault – in retrospect, this was really similar to those calls I used to force my mother to make so that I could leave social situations and blame it on her. This, I realize, is fucked). Anyway, I was all like “Sorry!” and sat with my poor friend, who looked like a jackass. I’m a dick.

In our hotels, we were allowed to roam freely until 9 PM, which was “curfew” – everyone back in their own rooms. We arrived back at the hotels at 7 PM, and I spent the two free hours in my room with my poor friends, crying. IT WAS TOO MUCH FOR ME! I could not be near him. What would I say? What was I supposed to do with my hands while I talked? Or while I didn’t talk? Was I supposed to look at his face or at his t-shirt? WHAT ARE SOCIAL QUES, I asked them. WHY CAN I NOT MASTER THEM.

Somehow, they talked me down. And then, at 9:05, I did what I had to do. Mark was residing in the hotel room DIRECTLY next door to mine. But I waited until after curfew, and then I called him on the hotel phone (I just had to dial one number, since it was just a room-to-room call). And I broke up with him. OVER THE PHONE, WHILE IN THE SAME BUILDING. I don’t even remember what I said, but I know it was terrible. Just the worst. The most awkward thing one could really do. Especially since the next day we had to take a bus back from Quebec together (thank god for that seating rule, right!).

That is how my first relationship ended. In case you’re wondering, my first kiss did not occur for two more years, and it also had to do with a chorus trip and an awkward situation in a hotel room.

Catherine: Jana, you are wearing Tevas in that picture. You’re really ok sharing that with the world? I mean, if you are, then wow. Brave, but I just wanted to call it to your attention. Because Tevas don’t look good, not on anyone. And if you (dear reader) are wearing them now, perhaps this is a good time to take them off? Unless you’re wearing those weird toe shoes underneath or something. In which case, get off the internet and head back to the store and join the rest of civilization by buying some proper footwear.

This post also reminds me of a post I will have to write someday, about how I spent the entire Freshman Boat Cruise on the back of the boat, alone, because I thought it meant I was “really deep” since I wanted to “take in the skyline.” (Surely it had nothing to do with me having approximately zero friends.)